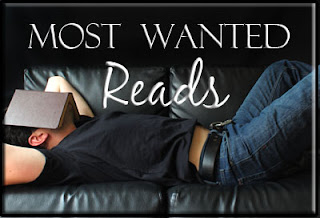 Almost every author I know is a bibliophile.  When they aren't clacking away at the keyboard or scribbling something down, they more than likely have a book in their hands, or on their e-reader. What can I say it's an addiction that usually ends up pushing the very limits of our mad money each month.  It's like we can't get enough.  Of course, with the boom of e-books and the ease of 1-clicking on Amazon, we find ourselves like a kids in a candy shop.

Unfortunately I find myself on a very limited budget, so I'm starting up a list of what I call my most wanted reads.  And I'll be featuring one book each Thursday...and hopefully get suggestions to add to my growing to be bought pile.    So who's up first?

Discovering Dalton by Nicole Colville.  Honestly it was the absolutely beautiful cover that attracted my eye.  It's gorgeous and there is something about a man with ink that makes my mouth water every time.  After reading the angst filled blurb, I was hooked.  Yep, this book will be the first on my "Most Wanted Reads" list.  Check it out.

Blurb:
At fifteen, Troy and Liam were fostered by the same family, and although they hated each other at first, they gradually became solid friends. As adults, the two foster brothers live together. Both experience tough times, each being a rock for the other, but their love had never been anything other than brotherly.

Until they both fall for the same guy, and things get... complicated.

Dalton is fresh out of a ten year marriage. Feeling lost, he concentrates on the only thing he can control—his body. Developing from a chubby, unfit police officer into a lean, mean inked one, Dalton has never looked better, but inside, he's never felt worse. A relationship is far from his thoughts, and one with another man makes Dalton even more confused. He takes time to get to know Troy and Liam separately, but Manchester isn’t that big, and sparks fly when fate throws the three together.

Together, these three fight it out between them. Both Troy and Liam demand Dalton choose between them, but what if he didn't have to choose? What if it could work between three?

The things in life we fight for are never the easiest, but they’re the ones worth holding onto forever.

So what book has caught your eye this week? 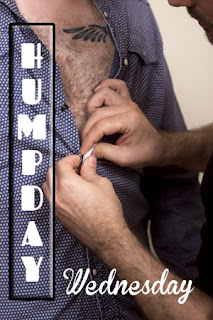 So you're probably wondering what Humpday Wednesday is, and is it really as naughty as it seems?  Well, considering what I write, I'd have to say yep, you're absolutely right. I'm going to be featuring 500-600 words of explicit, down and dirty snippits from my books - whether it be published or WIP.  It's so  naughty.  But then you wouldn't want me any other way, now would you?

So why do we let the good times roll, as I share a rather naughty snippet from my Beyond Fairytales book,  Don't Call Me Iron Man.  (While not all my snippets will be from published work, I cannot yet reveal what I'm working on - I'm such a tease!) So enjoy the snippet, and I'll catch you back here next Wednesday.

Ghost-like caresses skimmed along his abs, avoided his aching cock to settle on the sensitive flesh of his inner thighs.

“So here’s the deal, the moment you let go, this all stops. But as long as your hands remain as they are, I will give you pleasure like none you’ve ever known.” A thread of steel infused Lucero’s voice. “Do you understand?”

Ivan nodded, his hips lifting off the bedding as Lucero’s calloused fingers found his scrotum. “Hands on, you continue; hands off, you stop.” He gritted his teeth as the cyborg cupped his tight balls in his palm. “I got it.”

A low chuckle reached his ears. “Actually, I think I’m the one who has it.”

A gentle pressure tightened around his gonads. Ivan bit his lip to keep his moan to himself. He loved having his balls played with, the rougher the better, but damned if he’d tell Lucero that.

Lucero loosened his grip and Ivan wanted to beg for the return of the harder touch. “Hiding your pleasure won’t be tolerated. You agreed to give it to me and I’m holding you to your word.”

“Fuck…” He pressed his head back as his hips rocked back and forth. “I need…”

“This?” Lucero’s voice was closer than before, but it was the deft hand which clamped down on him that had the tortured sound escaping Ivan’s tight throat. The perfect blend of pain and pleasure was as foreign as this new world he found himself in. He wanted, no needed to spill – now.

“Gods…yes. Stroke me…please!” He continued to cling to posts, his mind nothing more than a haze of pleasure as a wetness enveloped the crest of his cock. “Aw…hell…I need…” His hands loosened as his need to thread them through Lucero’s hair, to hold him in place until he shot down his lover’s throat grew. But the second his grip slipped, the heat was gone.

“Are we stopping?” Lucero’s question sent a flurry of panic through him.

“No!” He returned to his former position, but found his desire to touch the man between his thighs grew with the return of Lucero’s tongue. “Tie them!’

“No.” The graze of lips against the crease of his thigh tormented him, but reminded him of who was in charge. “They will remain untied. Your submission, your pleasure must be freely given. It’s not something I will take.”

“Shit...” Tears pricked at his covered eyes. “I can’t promise I won’t slip. The pleasure, the pain…is too much.” A huge sigh shook his body. “But damned if I don’t want it.”

“Then you will endure and remember my command. Let go and this is over. I will send you back to the great room, unfulfilled.”

“I get it.” He squeezed the wood under his fingers until he was sure his knuckles were white with the effort.

Before Ivan could grumble about the claim, he was shot right back to the edge of sanity as Lucero rolled his balls while sucking him deep inside of his mouth. Ivan’s breath caught then released on almost a wail. The sensations of Lucero’s lips as they tugged on his glans, while the touch of strong fingers against his hair roughened sack piled upon one another, until the ominous crack of wood above his head echoed through the room. Desperate to come, he stilled, afraid he’d break the spindles free and Lucero would abandon him. He groaned as Lucero released his cock, his tongue tracing down the underside to lash at the base.

“So close, but can you give over?” Lucero sounded hoarse. “Will you submit?” 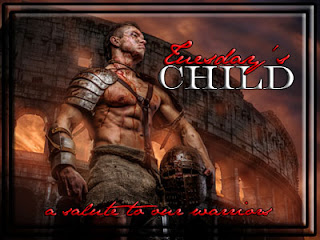 So I've got a decided love affair with hunky warriors. But what does that have to do with Tuesday? Or any other day of the week.  Well, wee one, pull up a chair and I'll explain the convulted, ADD spawned connections to you.

You see it all started long, long ago....like last Friday, when N.D was looking for something to put up on her blog as a weekly feature. She had all the other days of the week figured out but couldn't seem to put her finger on what to do on Tuesdays.  She didn't want to do the random crap that Dakota was doing (too much work), however Tuesday holds a special place in her heart.  Why?

And yes I know the picture is the same in the badge...I made it as homage to Michael Stokes increadiable picture of the warrior outside the colusuem.  You can find it HERE. 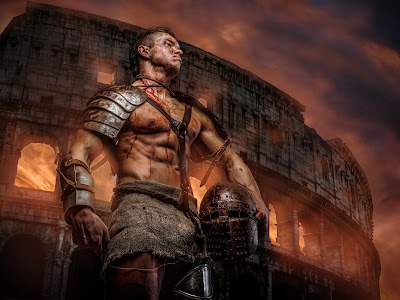