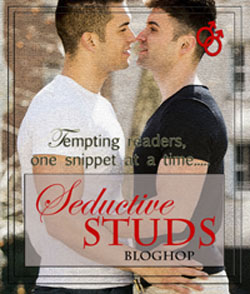 I'm super excited to say that the lovely Thianna has granted our wish and has brought back Seductive Studs  (I don't know about you, but I've missed reading all those steamy m/m snippets each week.) And of course, this week is extra special for me. I just recently re-released the first book of my Xenres Sins series.  Take a peek at the snippet below (and revised cover) as Asha is coaxed into wagering more than he's expected.  But he's not truly worried - after all the house always wins.

And speaking of winning...make sure to check out the rest of the peeps on the blog hop.

Asha fought the urge to beat his chest in frustration. This wasn’t going as he’d planned when he’d first spotted the wolf shifter. “Tell you what. Let’s play a single hand of stud. If I win, I get you for the night - tomorrow night to be exact. I get you from sundown to sunup. I can do anything I want to your body.”

“And if I win?” The wolf pushed the distracting blond hair out of his vision.

“Well, perhaps I’ll reconsider your offer to sleep with not only one of the members of my coven, but two of them.” Asha nodded to the cards. “All it would take is a few minutes of your time.”

The wolf looked torn for a moment before his features hardened when Asha saw a peek of fangs, preceding the man hiding them. “Tell me your name. Are you the ruthless bastard or the greedy one?”

Asha gave a low chuckle. “Picked up on that already? And you’ve only been in the club for ten minutes. Damn, word spreads quickly.”

The shifter rolled his shoulders. “So are you going to tell me your name?”

“After the hand. Take a chance, or do you think you can’t beat me?”

“It’s not a matter of beating. It’s a matter of the prize.” The man toyed with his beer. “The prize you offer isn’t enough to motivate me into risking a night at your mercy, vampyre.”

Grudging respect shifted through Asha. “And what prize would you like, if not being the meat between a Saeed and Aseem sandwich?”

Blurb:
Welcome to Xenres. Located in the heart of Dushanbe, a person can indulge in any sin imaginable, which is exactly what Eryk Solie has set out to do. As a lone Arctic wolf shifter in a foreign country, he longs for something more than mindless one night stands with men who could never completely understand him. Intuition and a tip from a local leads him to Xenres. Inside the notorious gambling hall, he finds his mate, one of the owners of the club. Too bad the man is considered to be one of the most ruthless vampyres in the district. To win a night in his mate’s arms, Eryk will have to lose at a game of chance.

Asha Talavi not only co-owns the darkest gambling haunt in town, he’s also a self-made vampyre. His ruthless nature has gotten him everything he’s ever wanted including the sexy wolf shifter who dared to accept his challenge over a hand of cards. But even after Asha claims his mate, there is treachery a foot in the form of a former lover. And when Eryk returns the following evening, he tracks down his mate to only find the man with another, claiming he doesn't remember him, or their wager and mating. Only an ancient ritual will tell if Eryk's love will be a match for Asha's ruthlessness and which shifter will in the end claim Asha.