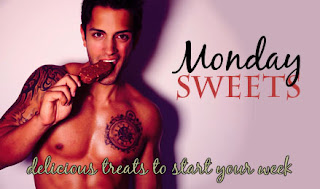 Why is it that everyone seems  hates Mondays?  Is the return to the work week? Or is it just because we listened to our parents bicker and moan about it?  Hard telling, but as long as there has been Mondays, we humans have been moaning and bitching about it.

So this week, at Livvy's insistence, we're kicking over a new leaf, and finding something entirely different to moan about - and I'm not just talking about sexy eye candy.  Nope, my bitchy muse, has demanded that I share the absolute awesomeness of sweets.  (She's pissed I cut the sugary treats out of our normal diet.)  So I guess you could say she's going to torture me for a change with delicious goodies she's found on the web.   And let me tell you the first one she ran across on Pinterest is a doozy.  (Can I kill her now?)


So without further ado, let the first glimpse of hell...I mean heaven pass before your eyes....